The Origin of Asakusa

During the Jomon era, Asakusa was under the sea.
They say it came over the sea in the Yayoi era.

How did the name "Asakusa" come about? According to historical information retrieved from Tokyo-fu, it is commonly believed that the name Asakusa originated from the small grass (kusa meaning grass) that grew in the area of the Musashino region.
When tracing the history of Asakusa, one of its most symbolic sites is the Sensoji temple which is only a five-minute walk away from Asakusa Imahan. It is said that Sensoji temple originated from a donated golden Buddha statue 5.5 cm in height. The Buddha statue was caught in a casting net operated by famous fisher brothers at the Sumida River and was brought by a priest around 628 A.D. To this day, the Senoji temple remains a religious symbol representing the evolution of Japan and has also grown into a popular site amongst tourists.
By the beginning of the Edo era, Asakusa had already gained great economic power. During such a prosperous period, people in Asakusa enjoyed various sorts of entertainments such as Kabuki where street entertainers performed in show tents. Kabuki remains a popular traditional Japanese theater and continues to attract large audiences to this day. Following the Edo era came the Meiji era, the Taisho era, the Syowa era, and the Heisei era. During these periods, interaction with foreign cultures diversified the Japanese culture as people began to incorporate Western traditions into their daily lives and modified them in a way that merged well with the Asakusa style. It was during these days when Gyunabe (old name for Sukiyaki) in Asakusa gained more popularity.
Despite such prosperity, Asakusa has also suffered many disasters such as the Kanto Big Earthquake and Tokyo Big Air-raid. Even through such hardships, Asakusa has remained a symbolic location as one of the major origins of the Japanese people and will forever be the roots of Japan. 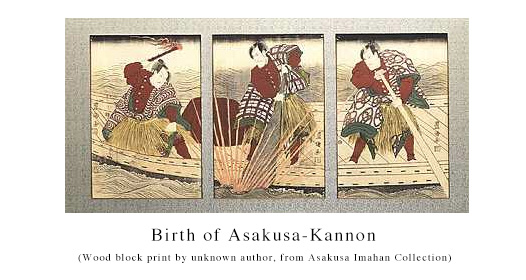 When we are requested to tell some story about Asakusa, we will tell about "Sensouji temple". It is said that Sensouji temple is originated from the donated golden Buddha statue of 5.5 cm tall which was caught in casting net operated by famous fisher brothers at Sumida River and brought in by an intelligent priest of the area for pray in 628 A.D. After long time has passed since then, Sensouji temple has been gradually popular and famous as a central religious symbol of public. So if Sensouji temple were not here in Asakusa, it should have been so uncivilized site for us...? 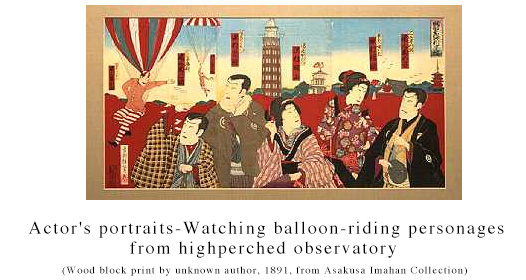 As you know when entering in the Edo era. Asakusa had powerful growth in both culture and economy. At that period in Asakusa, people enjoyed so much with such entertainments as Kabuki, street entertainers and show tent. Time left the Edo era and passed through the Meiji era, the Taisho era and the Syowa era to the Heisei era. During those time, culture from abroad has magically changed its feature to such as Japanese Opera, Japanese revues, croquette, pork cutlet, all of which have been modified Asakusa-like culture. In those days, people would think it was fashionable to eat Gyunabe (old name for Sukiyaki) in Asakusa. 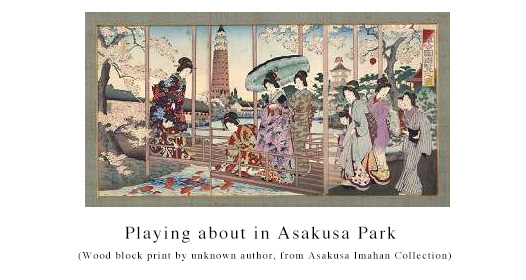 Asakusa has experienced disasters such as Kanto Big Earthquake and Tokyo Big Air-raid. However, through the experience, Asakusa keeps on going as the hometown of Japanese now and in the future.